Welcome to my world.  I'm a freelance photographer based in Brighton, UK and this blog tells you all about where I've been, what I'm doing now and where I'm going.

So, for the past couple of weeks I've been creating additional content and scheduling posts and stories on social media (as well as doing general logistics liaising) for Claire Smith's JOGLE ( John O' Groats to Lands End) self supported run.

As we went into Lockdown it became obvious that that I would need to have a bit of a refocus with my work.  Luckily I had already given some thought to this at the beginning of the year and decided that I would like to concentrate on portraiture in terms of photography, but to add this creative content/ scheduling/ administration service to run in conjunction with that.

And whilst it's true that there have been losses with all of this, all sorts of new ventures are springing up and existing ones have realised that social media is not something that can be done ad hoc when someone in the office has a minute.  Because I'm able to do photography and graphics for content, and understand social media scheduling etc, this is something that perhaps I can give you a hand with.  This website features mainly outdoors/ endurance type stuff but I have worked across all sectors and obviously these skills are entirely transferable regardless of subject matter.

And if you're an adventurer or athlete planning something exciting and could do with someone to liaise with sponsors and look after background social media marketing type stuff, then I'd love to hear from you.

I've just spent the past couple of days with one of the UK's finest ultra/ endurance athletes, Claire Smith.  She's going to be setting off on her JOGLE very shortly - that's running from John O'Groats to Lands End, the length of the British Isles (870 miles or so), without any external support - and I'll be looking after some of the social media side of things for her when she's doing the challenge.  Claire will still be writing and posting daily and filling everyone in with how she is doing, but I'm there to provide additional material.

The purpose of my trip was to get background/ product/ sponsor/ promotional/ portrait imagery which can be used for the duration of her run and then for future publications,  so we had quite a busy few days.

It seems a natural progression from providing visual content to helping clients with writing blurb and scheduling content.  I used to write for a living before I became a photographer so I feel that this is an area that I can move into easily and do alongside my primary photographic work.  My year, like some many of us, has not gone entirely according to plan but this doesn't mean that it's all bad - it has given me time to look at my strengths and to think about where I can best utilize them.

My aim is to spend a day or two a month with my clients where I work on imagery such as product, product placement, portraits etc and have a chat about their marketing ideas, and then go away and manage their social media on a day to day basis.  If you think that you'd quite like to subcontract your social media, using pertinent non stock images, please do drop me an email - [email protected] or Whatsapp me on 07595 218006 (Intl +44(0)7595 218006).

To find out more about Claire and her JOGLE challenge, please do have a look at her website www.brutalclaire.co.uk. She is raising funds for the hospice who looked after the end of life care of her friend and there's a link to her JustGiving page. I'm sure she'd be most appreciative of any donations.

Last Sunday saw my home city play host to the 30th anniversary of the Brighton Half Marathon.  It's now one of the most popular half marathons in the country and helps raise a lot of money for both Sussex Beacon, our local HIV charity,  and a variety of national charities. It was however an absolutely vile day weather wise with a lot of the UK totally besieged by storms.  Several events had been cancelled with high winds being a potential hazard and right up until Sunday morning I was keeping an eye out for alerts.

But we're clearly made of sterner stuff and it was business as usual.  Anything that could fly away and couldn't be battened down was dispensed with so no gantry, flags or signage and the thousands of undeterred runners turned out for the start at 9.30am.  I was one of 3 PR photographers employed by the race and my area was miles 7 - 12 which incorporated Hove Lawns, the beach huts, Peace Statue, bandstand and I360.

It was very tough conditions for the competitors - they were running into the wind for several miles and then had the joy of a very stormy promenade stretch with waves actually breaking over the turquoise Victorian railings.  And they had to dig especially deep because apart from the stalwart families and charity supporters, there weren't the usual masses of spectators lining the streets cheering them on.  They well and truly earned their sponsorship money.

This type of weather is fairly tricky to shoot in, both from a practical and a content perspective.  I kept getting that horrible windy spray rain all over my lenses and one of my cameras had real trouble focusing.  I did panic slightly that it had gotten completely fogged up because all I could see through the viewfinder was a fairly alarming whiteness when I scrolled back.  Mercifully this wasn't the case when I uploaded and looked on my screen but there always that pause of dread.  Content wise it was what it was which is maybe not ideal PR wise for promoting either mass participation PBs or a challenging enough but fun sunny seaside destination mini break race weekend. Whilst capturing suffering and grueling conditions is par for the course  with endurance stuff, it's the polar opposite of groups of cheery women in tutus and pompoms posing for shots en route which typifies the imagery for mass participation road running events. But anyway, if nothing else I hope that some of my shots are a testament to the competitors showing some true grit out there.

An absolute high point was the group of Penny Farthing cyclists who started the race and rode up and down the course encouraging the runners - a truly fantastic sight to see.

Here are a few shots to give you an insight into the race. Bask in the smug glow of feeling much warmer and more comfortable and less bedraggled than anyone in front, or indeed behind (!) the camera that day.

This week has been great.  I had the opportunity to work with Gwynnie Burrows to create content for her vintage, reworked fashion label A Curated Life...so something a little bit different and I loved it.  The location was Vine Street Vintage in Brighton, a shop specialising in retro/ vintage 20th century furniture and homeware so it was a perfect partnership.

As an art historian by training, I've always been interested in portraiture so it has been lovely to be able to explore this - to play with light.  I've never been entirely sure about flash so I laughed to myself when I was editing - I don't think that I was consciously aware at the time of the side light that was on but I thought this was my unconscious homage to the great eccentric English portrait photographer Jane Bown who carried a desk lamp around with her to illuminate her subjects - no faffing, job done in 5 mins and off she went...absolute legend.

I'm very much looking forward to 2020.  This year has been all about giving myself space to play, to experiment, to learn, and to perhaps take myself in directions I hadn't quite foreseen ...and it has been an amazing adventure.

If you'd like me to help you with a project, please do get in touch - [email protected]

I've just come back from covering DecaUK, a 12 day festival (?!) of ultra triathlon events, including the UK's first continuous Deca, together with the one a day Deca,  and the half up to quin distances as well.

As if a Deca isn't a fairly horrendous prospect in itself, the British weather decided to make it even more interesting, throwing in a 39 Celsius day just for sh*t and giggles and then to make a month's worth of water fall in a 24 hour period in North Yorkshire. It was all beginning to feel a bit biblical. Sections of the track turned into a quagmire and I'm pretty sure that I've developed Trench foot. There was a lot of weather, basically.

For an event of such a grand scale ( 24 miles swim, 1120 miles cycling, 262 miles running), it's an incredibly intimate and humbling experience. The place took on an almost surreal qualilty - a small lad named Owen deserves a mention in despatches as he liked to pop up and tag alongside competitors on the run course, asking superhero/ superpower related questions , and often prompting very robust debate on the subject. The distraction was very welcome. I never did find out whether he thought if any of the competitors were real life superheroes. 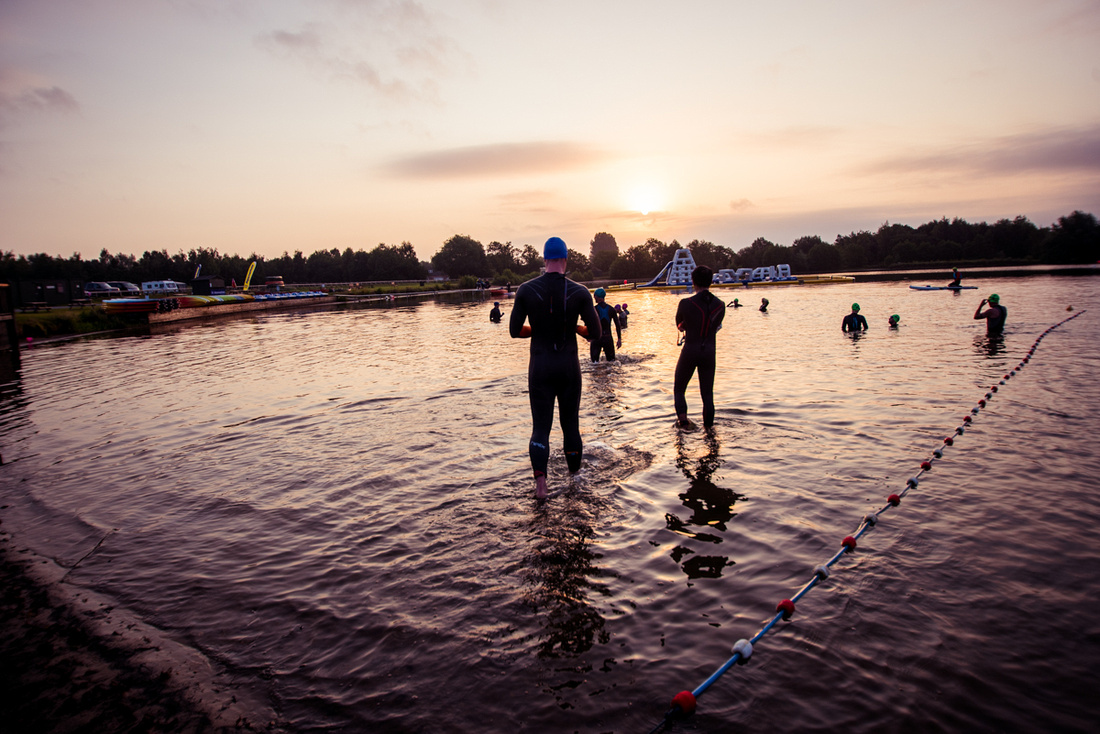 Extreme pain, fatigue...watching the care and tenderness that was given to them by friends, family, the Brutal crew, and amongst themselves.  It brought out all that is best in humanity and it's not often that one gets to experience it in a collective environment.

I used to feel a bit conflicted when covering events where people maybe aren't at their best, a bit awkward and intrusive.  I'm better at it now, simply because I figure that there are times when the right thing to do is to put the camera down and give someone a cuddle first.

I want the camera to be an extension of my eye, not some recording device devoid of empathy. I admit to having a few tears when I was editing - you become quite invested in wanting people to achieve this incredible thing and are sad for those of who did't get to the Finish line and just so happy (and proud) for those who did.

Here are some of my favourite pics to give you a sense of the atmosphere.  All people in these shots are real life superheroes by the way, in case you were wondering.